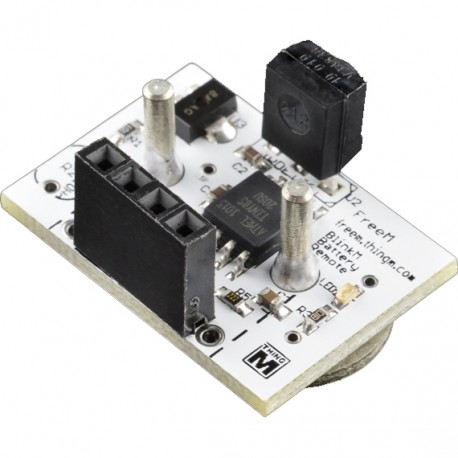 FreeM is a wireless BlinkMs controller and power supply for completely standalone deployment, programming and control of BlinkM smart LEDs. It’s like an invisible wire linking a LinkM or Arduino to BlinkMs.

When used with the CtrlM transmitter it creates an invisible, low-power method to control BlinkMs (or any I2C device) up to 45 feet (14m) away (and can be easily modified for much greater range).

It’s designed to work transparently with the rest of the BlinkM product line. Plug a CtrlM into a LinkM, point it at a FreeM, fire up the BlinkM Multitrack sequencer, and start programming it from afar.

It’s perfect for wearables, architectural lighting, stage sets, RC car lights, or anywhere else that’s difficult to get to.

Plus, as a bonus, it works with any TV remote that supports the SICS (Sony remote control) protocol, which includes nearly every universal remote made. Using basic TV remote keys it’ll turn BlinkMs off and on, change their brightness and hue, and run user-definable scripts.